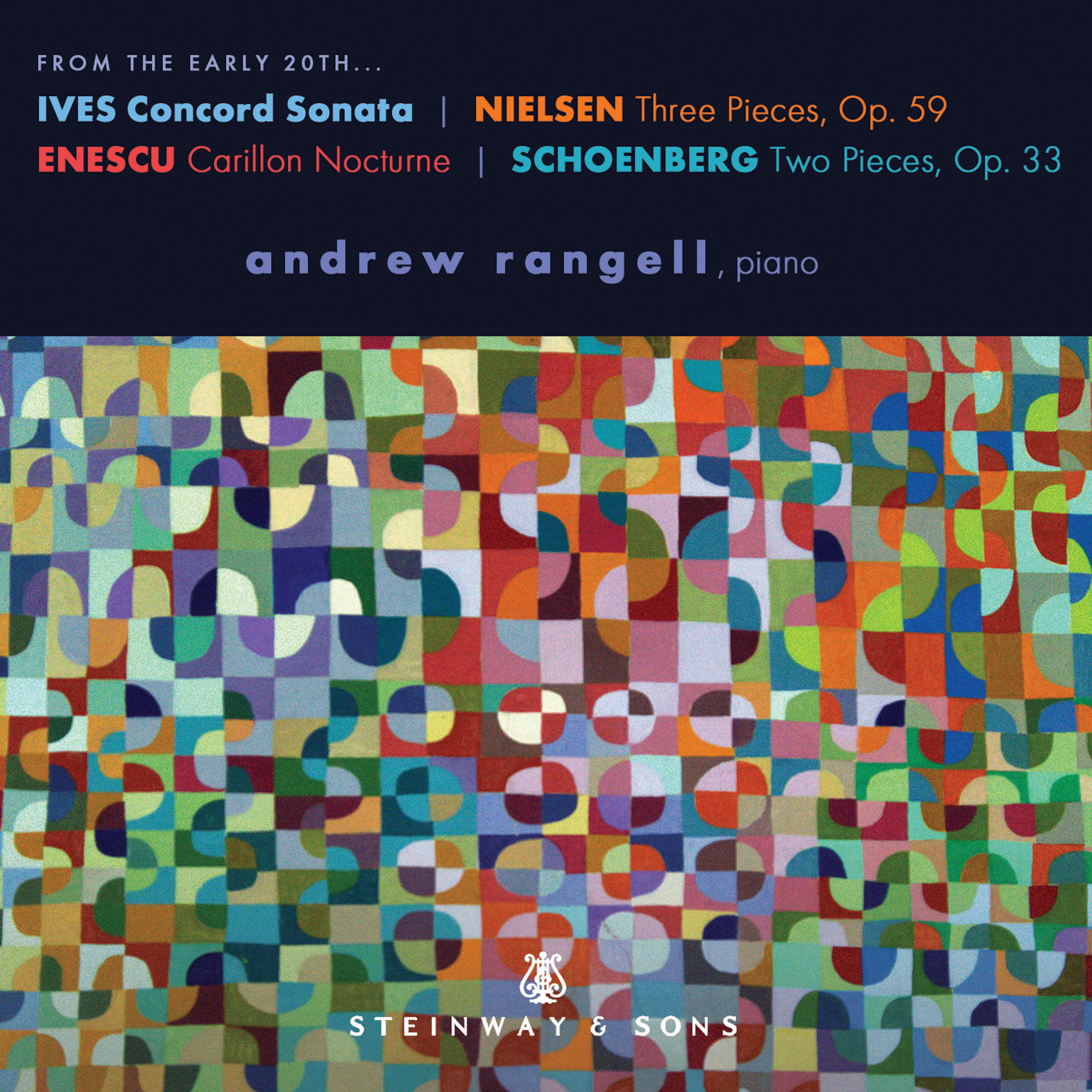 Andrew Rangell, who has previously recorded J.S. Bach, Beethoven, Chopin, and Eastern European folk music for the Steinway & Sons label, now turns his attention to composers of the early 20th century for his latest album release.

The centerpiece of the album is Charles Ives’ Concord Sonata, whose “monumental cussedness, tenderness, and imaginative daring epitomize the character and gifts of its Yankee creator,” in Rangell’s words. Rangell makes the work his own through several idiosyncratic executional decisions, including playing on piano the optional viola part at the end of the “Emerson” movement; using his own forearm instead of a block of wood for the black-key tone clusters in “Hawthorne”; and in “Thoreau,” whistling the optional flute solo. “I hope there may be, in this species of self-reliance, something of Emerson,” writes Rangell.

Framing the Concord Sonata are three shorter works from Ives’ contemporaries, including the final piano works of Arnold Schoenberg and Carl Nielsen; and George Enescu’s “Carillon Nocturne,” written at the same time as the Concord, and which Rangell sees as a spiritual counterpart to Ives’ “Thoreau” meditation.

“Veteran pianist Andrew Rangell has had a long career building unusual programs of music that find direct ways of communicating with audiences.”

“No listener could conclude otherwise than that Rangell loves this music and conveys it with all his soul and all forty fingers.”

“The evocations of bells in the Enesco, dissonant by still euphonious, complement the more dissonant sound world of the Schoenberg and Ives nicely. In the Schoenberg 33a, Rangell adds some judicious rubato that works exceedingly well.”

“Andrew Rangell does not play his music in a subjective, moody style, but rather objectively and tersely, emphasizing the music’s structure. This works particularly well in the Nielsen pieces.”

“Rangell wrings more angularity and harmonic tension from Nielsen’s imaginative Op 59 tryptich than anyone else on disc and gives shape and meaning to Enescu’s gorgeous evocations of distant bells.”

Long recognized as among the most eloquent and insightful interpreters of the major keyboard works of Bach and Beethoven, pianist Andrew Rangell has drawn acclaim for a variety of recordings, ranging from the music of Sweelinck, Farnaby, and Gibbons to that of Janacek, Enescu, Nielsen, Bartok, Valen, Christian Wolff, and many others. The present recording (Mr. Rangell's 30th disc) can be considered a counterpart, and complement, to his 2009 Bridge recording of Ives' First Piano Sonata, Nielsen's Op.45 Suite, and John McDonald's Meditation Before a Sonata (2003), a beautiful homage to Ives' Concord.

Andrew Rangell made his New York debut as winner of the Malraux Award of the Concert Artists’ Guild, and has since performed and lectured throughout the United States, and in Europe and Israel. He has also taught on the faculties of Dartmouth, Middlebury, and Tufts University. In the 1980s, already recognized as a distinctive recitalist and collaborative artist, Mr. Rangell gained national attention – and the award of an Avery Fisher Career Grant – for his vivid traversals of the complete Beethoven sonata-cycle in New York, Boston, Cleveland, Rochester, Denver, and other U.S. Cities. A hand injury sustained in 1991 forced Mr. Rangell to gradually alter the trajectory of his career, and eventually to place his highest priority on recording. In recent years he has created several DVDs for children – integrating his special talents as author, illustrator, narrator, and pianist.