America's historic piano maker moves into a new home for the Twenty-First Century.
By Robert Hillinck

The on-the-go New Yorker either looks straight ahead or down at their phone while they travel around the city. Since April 2016, however, any longtime resident walking through Midtown has been met with a surprise: What are those lights — this isn’t Times Square! A rare turn of the head reveals bright shafts of colored light, suspended from the ceiling in the center of the prominent glass-paned storefront on Sixth Avenue and Forty-Third Street. This colorful disruption from the daily commute is Newton’s Theory of Color and Music (The Goldberg Variations), an installation by artist Spencer Finch and the storefront is Steinway Hall — the new flagship location of Steinway & Sons. 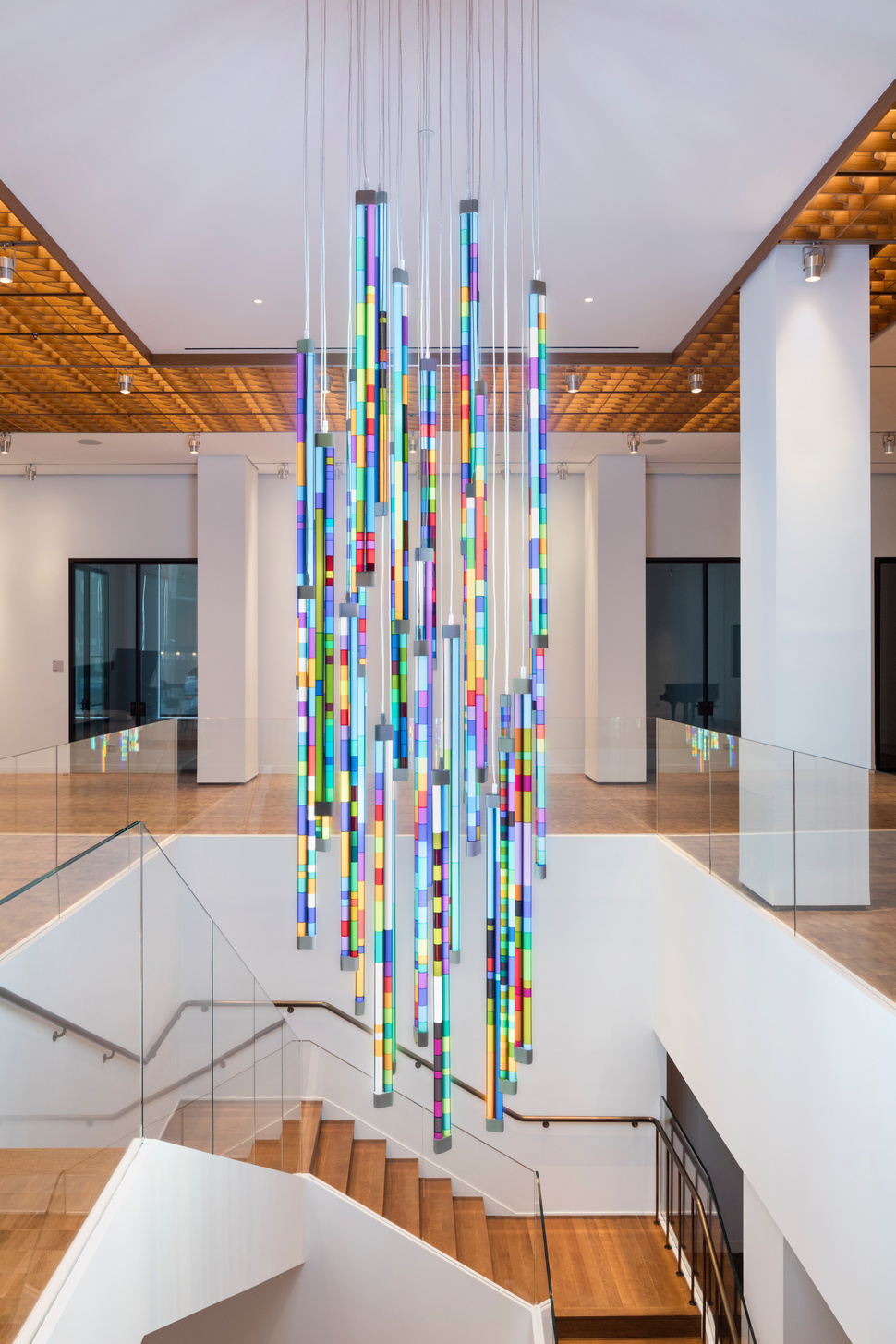 Finch’s installation is the artistic centerpiece of the Hall, hanging over the central stairway and connecting the two floors — each of which represents a vital aspect of the piano manufacturing company: on the ground floor, Steinway Hall is a retail facility, where music lovers can purchase one of the famed instruments. Descend into the heart of the building, however, and you’ll find a state-of-the-art performance space and a fully functional recording studio, as well as the historic piano bank where Steinway Artists, who choose to play Steinways without compensation, can pick specific instruments to be delivered to their performance venues.

Intimate by city standards, the recital hall seats seventy-four people. The space is perfect for a solo piano recital or jazz combo, and the teak-paneled walls are specially designed and acoustically optimized for these performances. The joint control room/recording studio is furnished to make live recordings for Steinway’s proprietary high resolution player piano system — the Steinway Spirio — as well as commercial-quality audio and video recordings. Livestreaming capability ensures artists can reach audiences around the world.

‘I believe that we have created an extraordinary destination for music that embodies Steinway & Sons’ heritage of excellence and craftsmanship.’

Architect Annabelle Selldorf tells Listen that she allowed Steinway’s mission to inform her overall design for the new Hall. “The task was to translate the passion and care that the company devotes to building instruments of the highest quality into a space which also broadens their reach and their welcoming attitude in the city. We designed a new home for Steinway that is inviting for everyone whether they come to listen to a recital, purchase a piano, or record in the studio — and even for those who are just passing by along Avenue of the Americas. I believe that we have created an extraordinary destination for music that embodies Steinway & Sons’ heritage of excellence and craftsmanship.”

A decorative bentwood ceiling on the retail level suggests the outline of a grand piano, while the wood itself — along with the acoustic paneling down in the performance space — represents the care that Steinway puts into choosing its materials. Similarly, the seats in the recital hall and the floor inthe artists’ piano selection area have the same striking yellow color — specifically Imperial Yellow, found on parts within the action of the Steinway piano.

Designers went to great lengths to replicate the old Steinway Hall’s signature end-grain wood flooring on both levels of the new space, drawing a direct association with the Beaux-Arts landmark on Fifty-Seventh Street that had been the company’s home and an institution within the classical world since 1925. A musical home to the titans of the twentieth century, the old Steinway Hall was replete with stories and memories. Artists ranging from Arthur Rubinstein to Billy Joel graced its glamourous recital hall and domed reception room with performances. The basement piano selection room at Fifty-Seventh Street inspired countless artistic collaborations as well, most famously when Sergei Rachmaninoff and Vladimir Horowitz met there and worked on the former’s Third Piano Concerto. The original Steinway Hall held similar cultural clout. Built in 1866, it included a two-thousand-seat concert hall, which was home to the New York Philharmonic for a quarter of a century and served as the venue for celebrated concerts by Anton Rubinstein, both of which helped cement the Fourteenth Street location as a cultural center in New York.

Many were sad to see the Fifty-Seventh Street location go — and the ninety-year history contained within. For Steinway however, it was important to have a home and inhabit a space that was fully equipped for the needs of artists and consumers in the Twenty-First Century. “The new Steinway Hall is more than a beautiful showroom,” says Steinway CEO Michael Sweeney. “It is also a gathering place where artists come together to collaborate and where the public can meet to enjoy a wide range of musical programming that continues our tradition of celebrating arts and culture.” With its exciting move complete, Steinway has ensured that it will be turning heads and piquing ears for the next ninety years.