This album marks Stewart Goodyear's debut on Steinway & Sons and is the first orchestral recording released on the label.

On his STEINWAY & SONS debut, the intrepid Canadian pianist shows off the intelligence and audacity that have led the press to compare him to Pollini and Arrau. Here, on the label’s inaugural orchestral recording, Goodyear brings his unique vision and renowned technique to two of the most powerful virtuosic works in the repertoire, Tchaikovsky’s Concerto for Piano No. 1 in B-flat minor, Op. 23, and Grieg’s Concerto for Piano in A minor, Op. 16.

Two of the most famous piano concertos ever written, Tchaikovsky’s Concerto No. 1 in B-flat minor and Grieg’s Concerto for Piano in A minor, shine anew in the nimble hands and imaginative mind of Stewart Goodyear on this debut disc on the STEINWAY & SONS label. The first orchestral recording ever produced by the label, the recording features Goodyear and the Czech National Symphony, who together unleash an impressive spectrum of color and nuance to recapture the initial shock these pieces elicited before they became iconic.

Like Maurizio Pollini and Claudio Arrau, to whom Goodyear has frequently been likened, Goodyear has a reputation for getting audiences to jettison their expectations and experience classic repertoire in a new light. Of one of his 11-hour Beethoven sonata marathons in 2012, Musical Toronto wrote that the performance “yielded a depiction of Beethoven’s ideas so vivid that it compels attention.” Gramophone praised his recording of the complete Beethoven sonata cycle as “vital, communicative and intelligently stylish.” On this album, he basks in how each composer broke with convention, from strange harmonic juxtapositions to an unabashed incorporation of folk music.

“Passion can be quite messy,” Goodyear said of his approach to Beethoven. Likewise on this new album, Goodyear is not afraid to transcend the aesthetics of elegance to get to the heart of some of the most passionate music ever written.

“...the Grieg is another reading that transcends the bounds of the studio. In fact, I’d put the finale up among the best, with Goodyear and Bogunia bringing a delightful, light-footed buoyancy to the dance theme and wringing the most from the concerto’s glorious peroration.”

“The sheer rhythmic acuity of the music, along with Goodyear’s deft realization, make for repeated listening.”

“Goodyear does indeed impress with his bullseye accuracy, rapid fingerwork, and an overriding sense of confidence borne from the mastery of his instrument.” 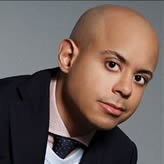