When Henry E. Steinway and his sons founded what would become the world’s most famous piano company in 1853, they promised to passionately execute Henry’s ambitious vision: “To build the best piano possible.” This 169-year-old mission statement is today imbued in every element of the Steinway brand, including the Steinway-designed Boston piano.

The Boston, born in 1992, is the culmination of Steinway & Sons’ decision to develop a new line of instruments to meet the needs of piano connoisseurs not yet ready for a Steinway. Designed by Steinway, the Boston is manufactured using a recipe developed from Steinway’s more than sixteen decades of premier piano-building and commitment to continued improvement.

Through its adherence to Steinway design principles, the Boston maintains its position as the best piano available in the popularly priced market, bar none. Thanks to its Steinway pedigree, the Boston sounds better, plays better, and lasts longer than any other piano in its price range.

There are distinct design differences between the Boston and any other piano in its market, and these design distinctions are born of the Steinway recipe. Just as the Steinway is known for its unmistakable “Steinway Sound,” so, too, has the Boston developed a reputation for a distinctly pure, rich sound that simply can’t be reproduced by other pianos.

The Boston owes its superior sound to Steinway–designed advancements:

From students to teachers to performing artists, pianists who play Boston know the benefits of the Boston “feel” and are passionate about its superiority to the touch of other pianos in its price range. The trademark responsive action of the Boston is owed to its Steinway pedigree, which emphasizes sophisticated geometry and the highest-quality construction materials.

Like Steinway, Boston uses all-wood action parts — never plastic like many competitors. Wood helps to determine the Boston’s characteristic feel and allows the player to experience the “feedback” from the keyboard that is found only in performance-level instruments. In addition, Boston pianos feature Steinway–patented (and famous) rosette-shaped flanges, which mate positively with the action rail, lock into place, and prevent any twisting or shifting of the action parts. This means that despite humidity, temperature changes, or heavy use, the Boston’s action is forever tight, sharp, and responsive.

The rosette shape on Boston’s action rail was originally patented by Steinway in 1868: it’s a time-tested hero when it comes to piano “feel” and stability, and no other similarly-priced piano offers it. In addition, the design of the Boston action requires less energy to start the hammer moving, permitting pristine repetition, an extremely responsive action, and greater control over a tremendous dynamic range.

Like the Steinway from whence it came, the Boston piano is designed for legacy and longevity. With its unique, proprietary design, Boston has emerged since 1992 as an affordable workhorse with an elegant pedigree and long-lasting heirloom potential. While the overwhelming foundation of the Boston’s durability stems from its adherence to Steinway design and Steinway–sanctioned manufacturing and materials, there are specific points that offer it a long-lasting playing life:

The Steinway-designed benefits of Boston pianos are real. Boston is designed by the world’s most revered piano maker, utilizing expertise and technologies honed over 169 years. Built in manufacturing facilities with the ability to build exactly according to the Steinway design, the Boston is fashioned from a famously-exacting recpe for piano greatness — one which has found countless passionate devotees the world over. And based on the ever-increasing number of Boston pianos sold to music schools and institutions, where performance and longevity are paramount, it’s clear that the word is out on Boston. 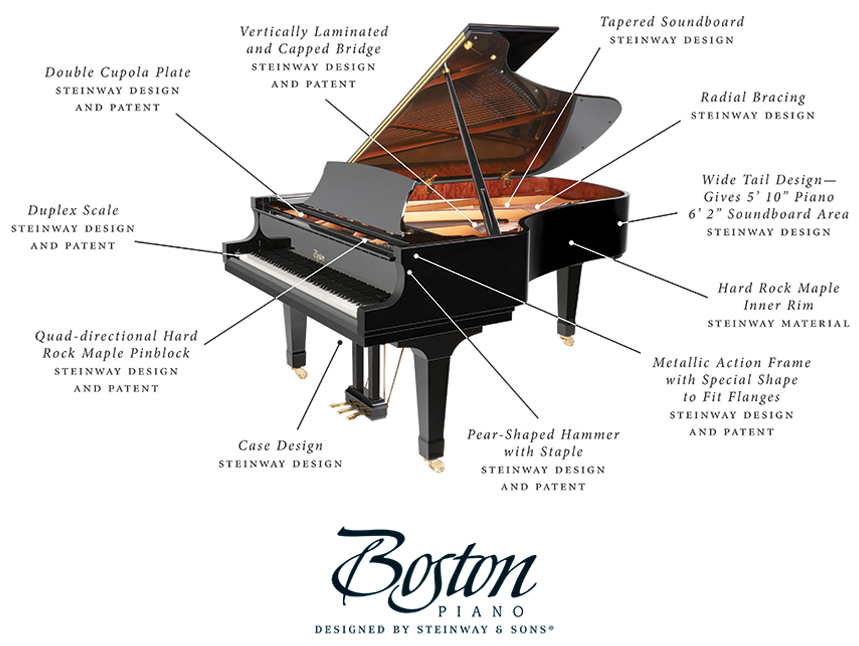