NASHVILLE, TN – With the right tools, Belmont University believes it can attract the greatest talent and build on a Christian-based legacy of transforming the world through multiple disciplines.

For its flagship programs in the arts, that mission requires pianos by Steinway & Sons. Offering diverse studies in all forms of music, Belmont became an All-Steinway School in 2008 through a $2 million endowment from the estate of Merrydale Sutherland Woods. A retired piano teacher who liked playing Broadway musicals on her own cherished Steinway at home, she generously planned for the future saying “there will be young people at Belmont who will be able to pursue their passion for music, and that makes me feel good.”

Mrs. Woods would have loved the story of Levi Kreis, who won a Tony Award portraying ’50s rock and roll idol Jerry Lee Lewis in Broadway’s Million Dollar Quartet. According to the university’s website, Kreis left Belmont early to follow his dreams, but did not want to leave any unfinished business. To finish his bachelor’s degree in commercial music, the singer/songwriter took center stage behind a Steinway concert grand in September at Massey Performing Arts Center. He packed the house for his senior recital. “It’s important to me to be associated with Belmont, especially in this industry,” Kreis told the website. “The university attracts the cream of the crop and has proven, time and time again, that it can groom the talent to have a remarkable impact on the entertainment industry and beyond.” Other alumni include Trisha Yearwood, Brad Paisley, Josh Turner, Clinton Forbis, Daniel Weeks, Brett McLaughlin, Russel Dickerson and Rayvon Owen.

At Belmont, dreams begin in the practice rooms and they are among the most popular places in the School of Music. “We continue to grow significantly and as a result, have to periodically add more practice rooms,” said Dr. Daniel Landes, Professor of Piano and Coordinator of Keyboard Studies. The school purchased a dozen new Boston uprights and a Boston GP-156 grand from Steinway Piano Gallery in Nashville to accommodate the extra traffic. “We have enjoyed a relationship with Belmont for more than a quarter of a century and it feels like we are family,” said Robert Klingbeil, Director of Institutional Sales at SPG Nashville. The university selected Boston UP-118S Performance Edition pianos, whose Steinway designs have garnered a strong institutional reputation for playability and longevity. “The affordability of the Boston piano has allowed Belmont to keep up with its growing enrollment while offering students a quality instrument. Bostons have a responsive action and produce a warm, colorful sound that allows the player to experiment with several interpretations of a piece of music,” Klingbeil noted. “Tuning stability is another valuable feature for the university as it relates to budgeting for their maintenance program.”

“Boston uprights are reasonably priced, and that is what we generally choose to use in the practice rooms,” Dr. Landes said. “The overall impression from students and faculty is good, so the Bostons meet our needs. They are the very best practice piano for us.”

Dr. Landes holds bachelor’s and master’s degrees in piano performance from the Shenandoah Conservatory and the University of Maryland, both All-Steinway Schools. He received his Doctor of Musical Arts from the Southern Baptist Theological Seminary in Louisville, KY.

Belmont’s All-Steinway affiliation is proving to be an excellent marketing tool. “We mention it in our recruiting materials and make a big deal of it when we have students and their families visit our campus for tours,” he said. 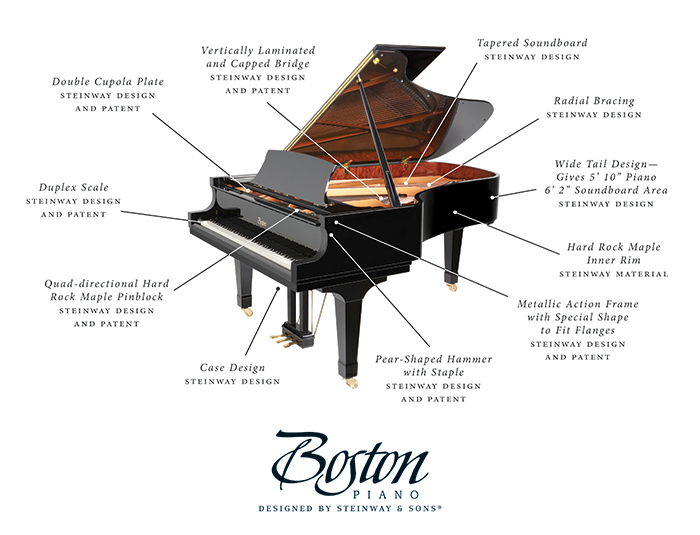